There is a connection between the many battles that so many people who live in this land we call British Columbia.  Our home on stolen land, First Nations Land. In the Vancouver Area it is the home of the Musqueam, Squamish and Tsleil-Watuth Nations.

Throughout the territory recognized widely as British Columbia where resource extraction has been the mainstay of this region’s wealth,  countless numbers of Indigenous communities have been resisting extraction without consent or return for centuries.

Today more than ever, people who identify as settlers, many of whom have benefitted from being part of settler communities are standing up and acknowledging what was so long-ignored.  Now, more and more so, the resistance is spreading lead primarily by Indigenous communities — those who live on land begrudgingly given to them through Treaties then ruthlessly trampled for the purpose of extracting what to capitalists has been the basis of their wealth. As well leadership has come from members of Indigenous Communities who live away from their land in urban centres, often in poverty.

On Monday night, May 7 the Canadian Mining Community was celebrating the destruction they have wrought all over the world.  They were celebrating each other in self-congratulating award ceremonies.

At the same time a group of activists also gathered to celebrate.  They did so outside the glass palaces of luxury at what is known as Canada Place to celebrate those who have been resisting Canadian Mines, many head-officed right here in Vancouver. From the fight at Mount Polley, described in an article by Emma Gilchrist in the January issue of DeSmog Canada in the following terms:

Despite the fact that Mount Polley is according to a headline in the same well-researched online publication, “one of the largest environmental disasters in Canadian history — no charges have been laid against the company,” DeSmog Full story deSmogCanada

In a serious, but light hearted event, opened with words by Tsleil-Watuth watch house co-ordinator Will George who made the connections between to Kinder Morgan on burnaby Mountain and the destruction taking place in BC and around the world brought about 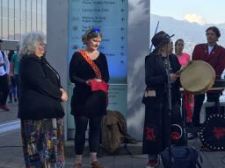 by these mining companies.

The songs of welcome by Indigenous matriarchs set the tone for the gala entitled: Unearthing Mining Justice . Whether in the Phillipines, Guatemala, Mexico,  or Tibet to name a few places that were called out during this first gala of its kind in BC.more…more about mining justice 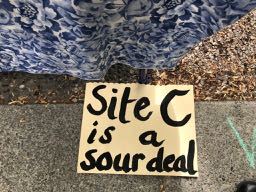 Lemonade, cookies and information about the disaster taking place in North Eastern BC.  It is amazing how little real information people living in the Lower Mainland have about the disaster that continues to unfold.  Ken and Arlene Boon are farmers from the Peace River who have fought passionately to stop this dam from going ahead.  Along with various Indigenous Communities who have been hurt by the non-stop destruction of fishing, hunting and farming land.  Currently two court cases are pending. One brought about by the Prophet River Band and the other by the Blueberry River Band.  Follow Ken and Arlene Boone at pvla@xplornet.com and Witness for the Peace.

Wednesday, May 9 a hose down for Kinder Morgan

In Burnaby, activists — both Indigenous and Settler stopped entry to all the gates including the waters of Burrard Inlet where Liam and his kayaking pals managed to hook themselves up to the fence stopping Kinder Morgan from gaining access.  The private KM security force known as the RCMP took a few hours to get out there to detach and arrest the brave young ones who are putting their time on the line.  Meanwhile in a Kinder Morgan boardroom in Texas,  USA  two Indigenous Chiefs  Judy Wilson of the Neskonlith Indian Band, and Rueben George of the Tsleil-Waututh Nation Sacred Trust travelled to Texas to meet with shareholders at the meeting Wednesday. The Chiefs succeeded in having a resolution passed that demands that KM ensure more environmental accountability. 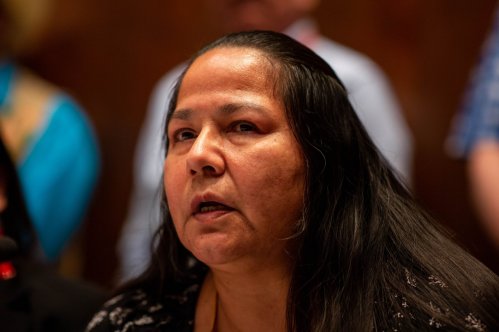 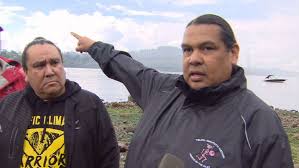 The week had started, of course, with the Greenpeace action to halt the transportation of the giant drill that Kinder Morgan brought to BC for the purpose of drilling through Burnaby Mountain. 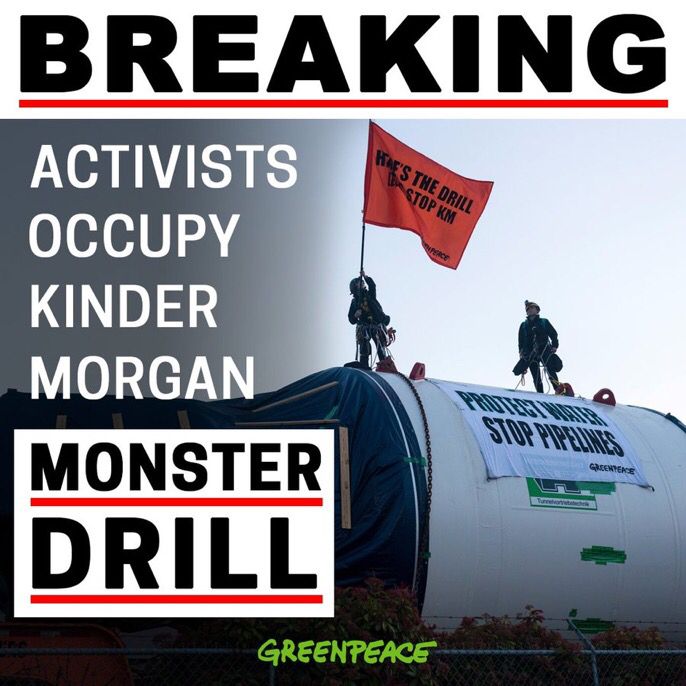 Thanks to the The National Observer   and DeSmogCanada

Community, art, people playing music and dancing together, writing a story, telling the truth are the cornerstones of our survival. In West Quebec, where I spend my summers, its a rewarding experience to swim or kayak in a clean lake. We're hoping and aiming for fewer non-electric motor boats, more kayaks, paddle boards, canoes and row boats. View all posts by allolulu

One thought on “Kinder Morgan, Site C, Canadian Mining another week of resistance”